How Insect Eyes Differ From Ours

Between mammals, we know a lot of the variety in eye sight comes from the ratio of cones to rods in the eye. However, insect eyes are a little different. As humans have a singular unit for an eye with two eyeballs, insects have what is known as a compound eye where there are many subunits that go into one eye, known as ommatidium. An ommatidium is a singular optical subunit that each has its own lens. Because of this difference, overall, vertebrate eyes differ from insect eyes much in structure, acuity, color perception, and function.

Mammalian eyes have one functional unit that is able to move in the head and swivel to gain a clear image of the world. A singular lens focuses all light onto photoreceptors on the retina, giving us better clarity of the world. On the other hand, insects have many individual ommatidium that connect directly to nerve fibers behind the eye. Each ommatidium only has a very small field of vision, so when all the images of each unit is put together in the brain, it is very pixelated. Even the dragonfly, which can have up to 30,000 individual ommatidia, does not have even close to the visual acuity as mammals and other vertebrates. The images below show the structural difference between vertebrate eyes and insect eyes: 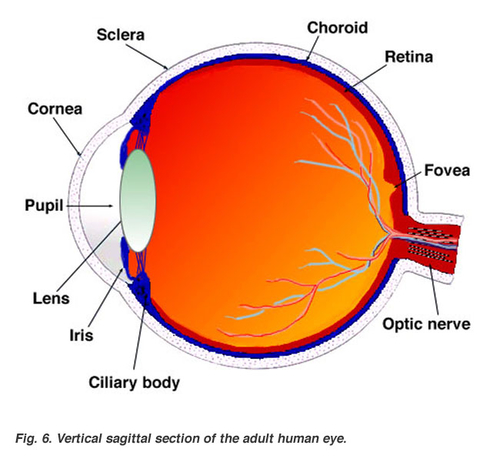 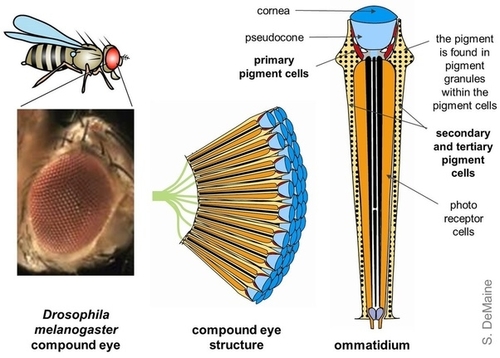 The structural difference between vertebrate and insect eyes accounts for the acuity and resolution of vision, but that is not the only difference in vision between insects and humans. Seeing color vividly is actually very rare for vertebrates and insects alike and humans have some of the most sophisticated eyes when it comes to color. Though other animals may have better color perception due to the amount of cones the eye contains, i.e. 3 in humans, insects rarely see color. Often their vision only varies between light and dark. However, there are a few insects that have more cones than humans. Bees, for example, have 4 types of cones and are able to see in the ultraviolet spectrum of light. Their vividness of color, though, isn't great. The picture below shows how a bee may see the world:

Humans are able to see with vividness and differentiation in color, while bees have a high contrast due to their ability to see ultraviolet light but lack of color perception. The environment for a bee is very dull and much of the contrast they see comes from the ultraviolet rays some plants and flower give off. It's actually a very interesting evolutionary quirk insects have developed. As a matter of fact, the human/vertebrate structure of the eye only evolved as early as 40,000 years ago, where the concept of a compound eye is much the same as insect ancestors as far back as 500,000 years ago.

Ultimately, the shape and structure of the eye determines its function, so the massive difference in structure between insect and invertebrate eyes also points to a difference in function. Insects are better evaders because they are able to see in many directions at one. They often have many ommatidia pointing in all directions all over the head. Humans, on the contrary, can only have a limited field of vision at a time since there is only one unit of the eye. However, since humans have very acute vision, they are able to pick up details to track and hunt down prey.

Vision is a very odd phenomenon that is flawed is many ways. The miraculous function of the human eye is very imperfect in design, but is still one of the most evolved and matured structures.

I need to fix the pictures , they are too large D:

I'm not sure what " Seeing in-depth color " means for the insects.  Are you saying they can't make comparisons between different colors?

also, could you find a more realistic picture of ommatidia.  They look so cool!

Great flow, great work! I agree about the pictures they are huge!