The GluMI (“gloomy”) cell is a new type of cell that has been identified within the mouse retina. These GluMI cells physically resemble amacrine cells, but are glutamatergic and have ribbon synapses like bipolar cells.

In the image above the yellow cell is a GluMI. Like an amacrine cell it is monopolar. Next to the yellow GluMI cell are red cells; these are bipolar cells that connect with top blue photoreceptors and ganglion cells such as the larger pink cell below. 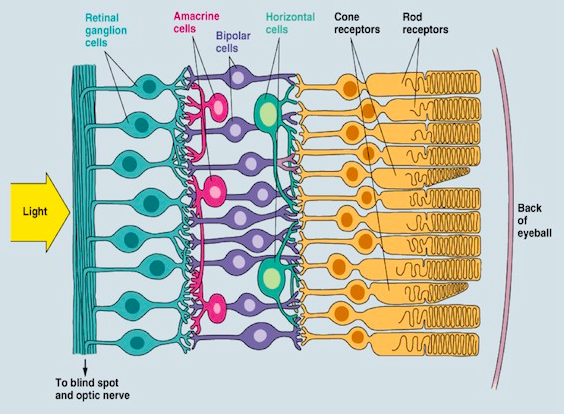 Monopolar neurons like amacrine cells normally do not make direct contact with the photoreceptors and are inhibitory as they help to keep retina nerve cell signaling from getting out of control. GluMI’s look like amacrine cells, but like bipolar cells they can excite ganglion cells. The researchers also confirmed the presence of GluMI synaptic ribbons with serial block-face electron microscopy, which allows for a 3D image at nanometer resolution. Bipolar cells also have ribbon synapses. This discovery puts to show how mysterious the retina can be. The researchers hope to further research the role that GluMI cells play within visual signaling.